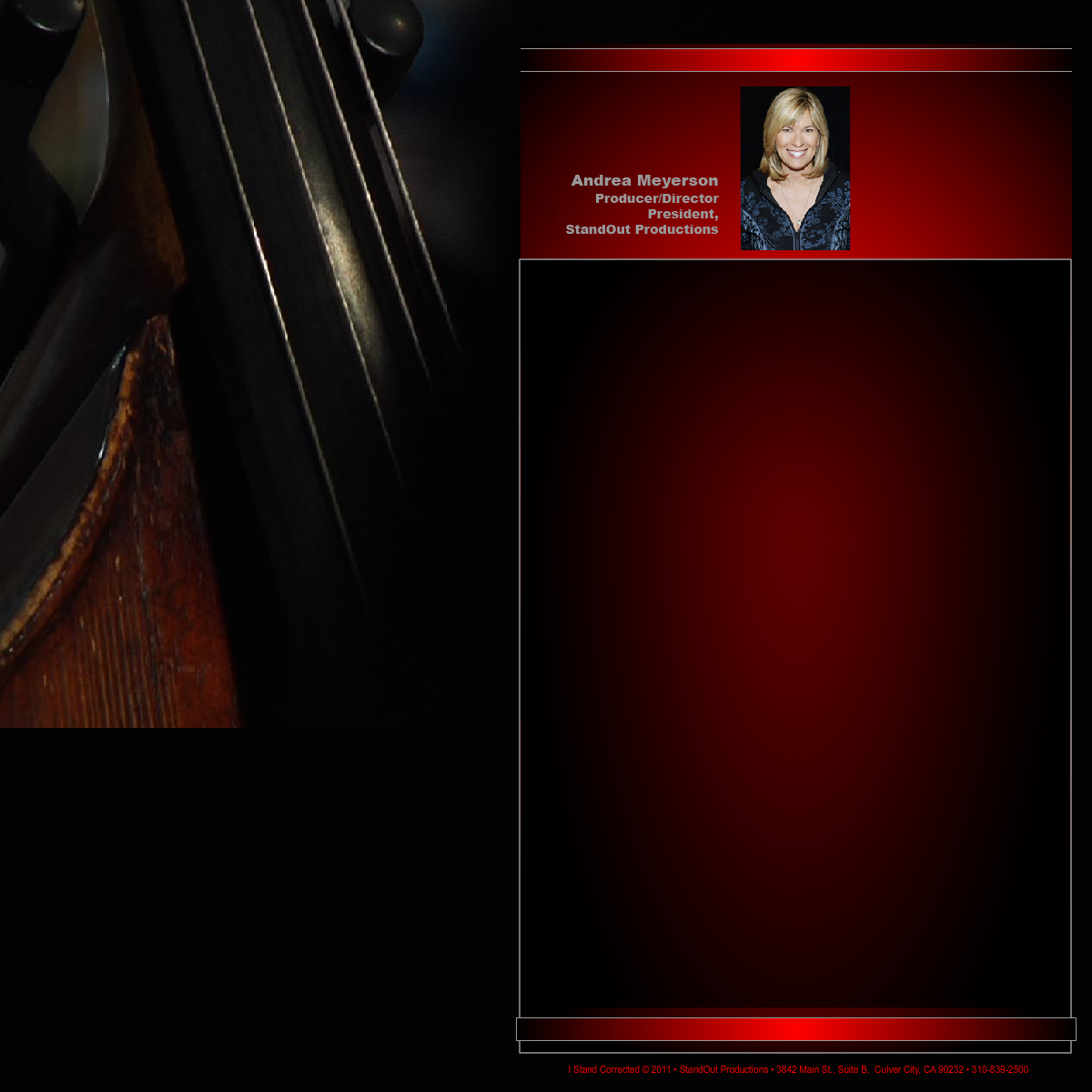 Andrea Meyerson is an award-winning creator of film and television programming as well as a successful producer of concerts and live comedy shows. As founder and president of StandOut Productions she has produced and directed more than 25 feature films, television specials and series episodes which continue to air on Showtime and Viacom's Logo Network.

In 2012 Meyerson completed the full-length documentary I STAND CORRECTED, which she produced and directed. The film premiered at the American Documentary Film Festival in April 2012 where it won the Audience Award for Best Film. Still playing at film festivals worldwide, I STAND CORRECTED has won a total of nine audience and/or jury awards and continues to receive outstanding reviews.
Meyerson is also a prolific producer of live comedy shows and concerts. Since founding StandOut Productions in 1997, she has staged live events featuring some of the country's best-known entertainers, including Wanda Sykes, Roseanne Barr, k.d. lang, Indigo Girls, Joan Armatrading and Brandi Carlile.

The recipient of numerous awards for her activism in the areas of LGBT and women's rights, Meyerson was recognized with the Los Angeles Gay & Lesbian Center's L.A.C.E (Lesbians Active in Community Empowerment) Award in 2002. PowerUp honored her as one of the "10 Amazing Women in Showbiz" in 2004. In 2006, she received the WIN Outstanding Women Award from the Women's Image Network and was one of three finalists for PlanetOut's Entrepreneur of the Year. Andrea made history in 2007 when she became the first out lesbian to receive the YWCA's Women of Achievement Award in the Arts & Entertainment Category. In March of 2008, Andrea was honored with the prestigious Human Rights Campaign's "Local Hero Award." She is also the founder of Women On A Roll, one of the country's largest social organizations for lesbians.

Meyerson recently directed two short films, SEAMLESS and RE:JOYCE, both of which can be seen on the film festival circuit in 2013/14. She is currently working on her new documentary FAMILY UNTIED, which is scheduled to be released later this year. The Pride of the Ocean LGBT Film Festival has selected Andrea Meyerson as their "Body or Work" Honoree on their Alaska Cruise in August 2013.